Rebuilding a city through art

Mostar, in southern Bosnia Herzegovina, felt the break up of the former Yugoslavia in the early 1990s hard. Numerous city buildings and cultural institutions, such as the centuries old Ottoman built Stari Most bridge, were damaged or destroyed by the subsequent wars. It’s been twenty-four years since the fighting ended, many still sit abandon with windows blown out. Yet Mostar is experiencing a revival. Artists are working to bring color back into this historic city that lost so much. 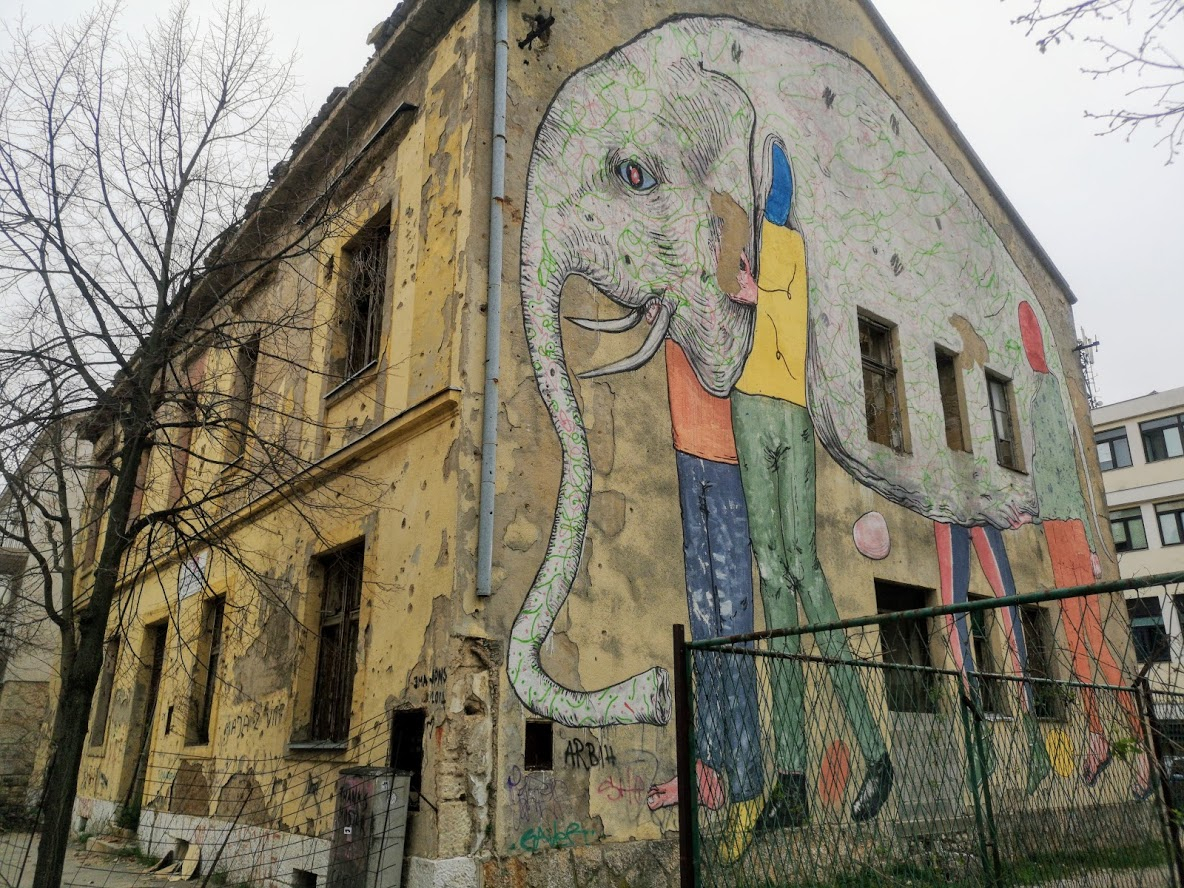 Street painting has been popping up across Mostar, breathing new color into the historic city still reeling from the pains of wars. /CGTN Photo
Street art has been popping up on the sides of deliberated garages, residential buildings, schools and in parks, giving Bosnia and Herzegovina’s fifth largest city something to talk about.
It all began as a project for art lover Marina Mimoza.
“I was always inspired by our public space. After 20 years we still have lots of damage and ruins on the street like the war was yesterday. All around us still are ruins. And that in some way inspired me to bring art in our public space.”
Marina started the Mostar street art festival in 2012 with unexperienced local artists, but that’s all she needed. Before long, Mostar’s ruins were inspiring professional street artists from all over the world. 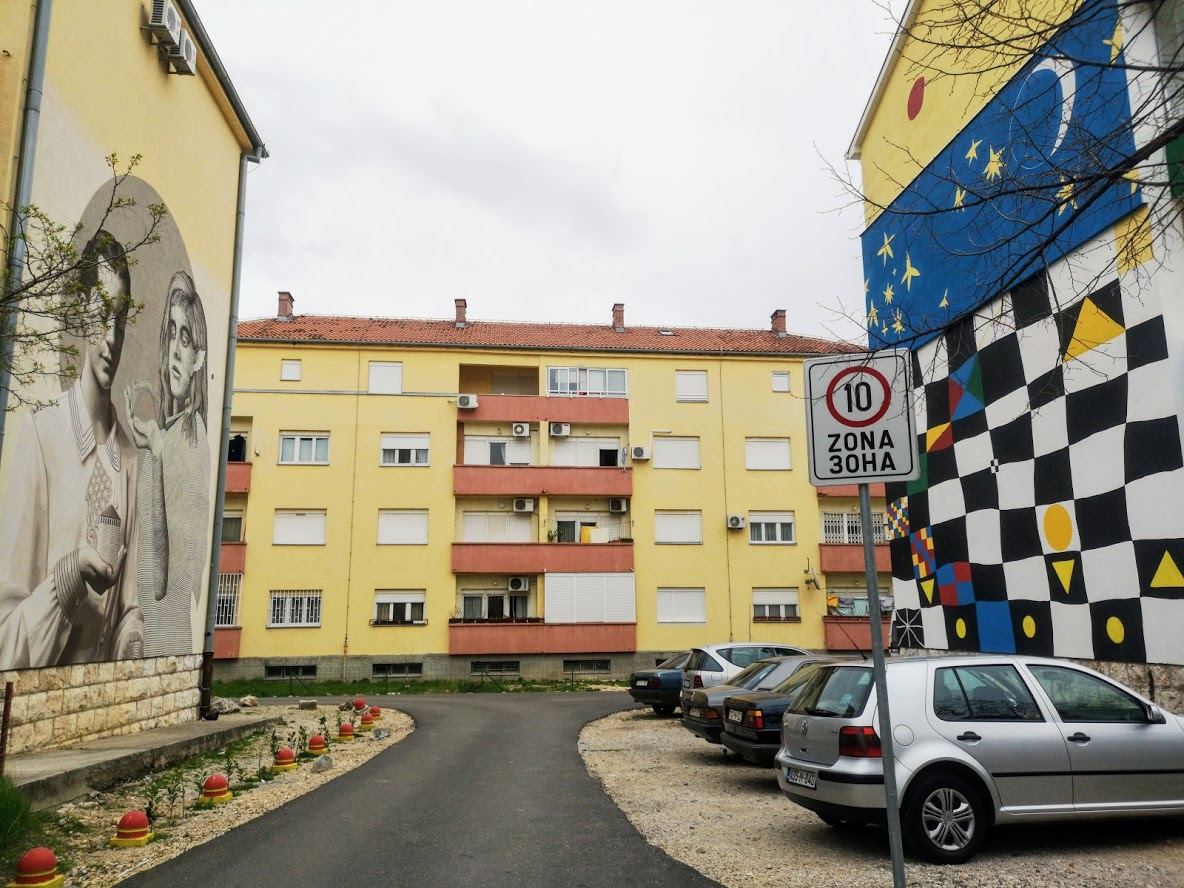 Buildings are painted with murals in the street in Mostar, Bosnia Herzegovina. /CGTN Photo
“The second year we started to collaborate more with artists in other cities in Bosnia Herzegovina, then (the) third year more artists started to contact us, artists (from) all around the world. And then year after year more artists came from different countries, different continents.”
Today, more than 100 murals dress the streets of the city.
“One is a portrait of two women who have in their hands part of the old bridge. And across that mural is one really abstract mural where is a chair, a star, a moon and when artist paint that one, I had comments like ‘oh this is Croats flag.’ But I think that is a really good contrast between that portrait and that mural.”
Another painting found in a park shows two trees kissing.
“That (one was) created by artists from Mostar and Bosnia Herzegovina and they just express their feelings. Kisses are love that we are connected. Always I speak about this project as it’s something together. We don’t promote any kind of identity only art, love and friendship.” 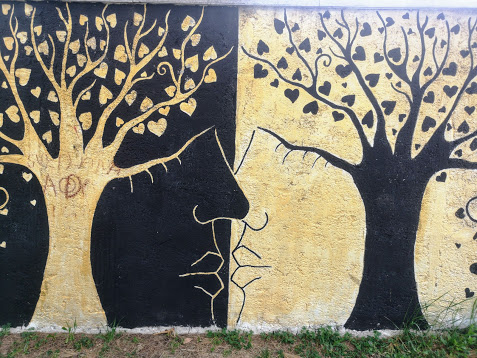 A painting found in a park shows two trees kissing, in Mostar, Bosnia Herzegovina. /CGTN Photo
In the wake of the devastating 1992-1995 conflict, graffiti popped up everywhere as a way to commemorate victims, show defiance or simply distract people from the unrepaired damage.
Many residents are happy with the positive changes the art brings, such as 28-year-old Anja.
“I feel that their enormity somehow drowns out the rest of the graffiti that displays national and fascist symbols across town. Before they felt like something separate from and added to the town. Now I use them as street markers. They become a part of the town in that way,” said Anja.
“I am so happy they are there,” said 24-year-old Lamija Grbic. “They seem to represent the voice of the city. It can be sad seeing the city soul in ruins. But having the street there, it’s a totally different image that you get. It’s the city fighting back.” Graffiti become a part of the city in Mostar, Bosnia Herzegovina. /CGTN Photo
Mostar businessman Mehmed said the murals could help the local economy.
“It brings more people to our city and not just to our old town. People go to other areas of the city to see the street art, and that brings business to those areas. Plus it also makes residents think and talk to each other.”
Marina would love it if the street art brought more economic opportunities to the city.
“It will be great for me that this story can be profitable in that way. We have a beautiful history like the old town; we have urban art on the streets. It has a good impact on people.”
Bosnia Herzegovina may still have a long way to go in their rebuilding process, but Mostar’s street art project and others like it are slowly helping bring the country out from the shadows of its past.
“We start(ed) this project and all idea with lots of love, and maybe people feel it. We love our city, we love art, and it brings people together.”